The land you live in has long been mired in a war between good and evil. Heroes and villains have risen and fallen.

Eons ago, a Chosen One was prophesied to come and deliver the land from the great evil that endangered it. But this deliverance would come at a great cost.

Not only were you fated enough to see the rise of the Chosen One, you have become a follower and companion.

Now the prophesied day of reckoning is nearing, and the Chosen One has set out to do battle against the great evil.

They have asked you, and only you few, to join them on this journey, for it is perilous and comes with many great hardships.

They chose you because they know you believe in them and not just because you have to.

Facing Destiny is a storytelling game about accompanying the Chosen One to the last battle against a great evil. The game utilizes a set of instructions (included), and standard deck of 52 playing cards (not included) to tell stories of their past, their entanglement with the Chosen one, and their hopes and fears about the future.

Facing Destiny is a Descended From the Queen game.

Artwork is public domain from http://openclipart.org. 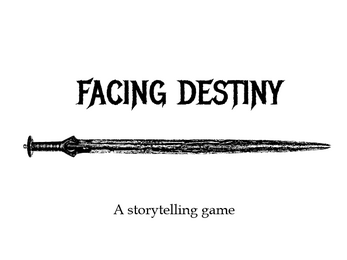